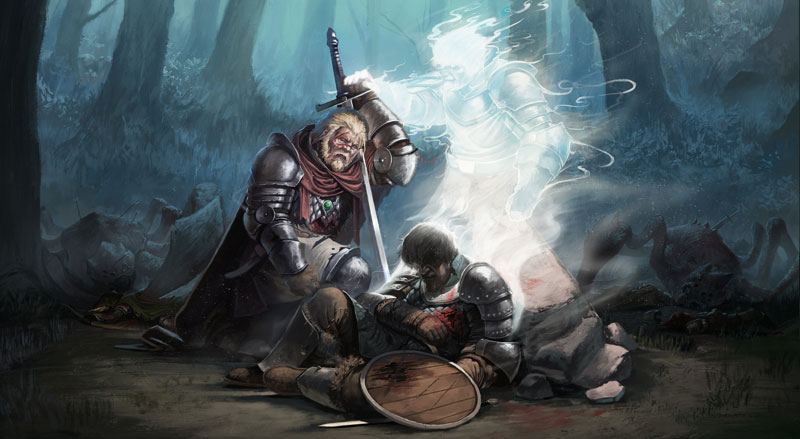 Hello and welcome to our in-depth article featuring our bi-pedal, mother-of-ingenuity race; Humans!

Our most asked about mechanic for humans is magic! What can humans do? How are spells cast? Exactly when Humans will be able to learn the art of magic is currently a work in progress, though they will be able to choose one of three arts to learn.

Once a human decides to delve into the world of magic, they will be able to choose one of the above arts, after which the other arts will be locked away from them forever. The choice is difficult, though rewarding, regardless of which art a human decides upon. After a human has mastered one of the arts, they will be granted an ethereal form based on the art chosen, granting them heightened abilities far more powerful than other lesser mages.

Human crafting in Trials of Ascension will be familiar to other games. Humans will harvest resources from the land around them in order to craft and build items such as torches or ingots. Once a human has crafted basic items and has honed their skills more, they will be able to help craft buildings as part of a village.

Combat is planned to be fully interactive with a wide range of options. To be a mage, equip a staff and call the elements, the darkness or holy power upon foes. An archer merely needs to equip a bow and loose arrows to bring down enemies from a distance. A swordsman’s multiple melee weapons can wear down an opponent. There will be many diverse options when it comes to combat and how humans dispatch foes. How one will fare in the world of TerVarus will be up to them and what equipment is utilized.

Stamina, though, is the resource that is vital in combat for all races, more so for humans. For humans, stamina is not only for attacks but for magic and actions related to combat such as rolling, dodging and blocking. Stamina is wholly important when it comes to human combat and the wise maintain their stamina if they want to survive to see the coming day.

Humans are able to harvest nearly everything, with exception to nugget nodes, from the start. From the highest trees to the soil beneath their feet, everything is harvestable and usable by humans. When humans have reached a sufficient mastery of certain skills, they, along with dragons and raknar, will also be able to harvest nuggets and use nuggets in crafting. Some resources, however, will need the proper tool in order to be harvested. Humans can pull bark and limbs from trees for small amounts of wood, but kicking a rock isn’t exactly productive beyond the chuckle of others nearby. Achievement for “Rock Punting” anyone?

Humans are able to walk and run through the land as well as swim in oceans or lakes. Humans will not be able to fly through the air like Dragons, nor will they be able to hang off the mountainsides like Raknar. If a dragon and a human decide to ally, the duo might just get the squishy human up into the air! Training dragons takes a bit more finesse and may involve a great deal of bribery beyond a few measly fish, the humans would be the ones who need the most training and equipment, to keep from falling to their deaths, that is.

Humans are the most diverse race in TerVarus. With the help of tools, they can accomplish greatness, but in order to actually stay alive, they need to hone some skills and start using some of them in order to keep warm, satiate hunger and survive combat with fauna, dragons, raknar, and even other humans.

Humans will be moderately difficult to play, starting off without weapons, however, they won’t need to be overly cautious about the fauna on the land either. Once equipped with basic gear, humans should be able to take down nonaggressive fauna with relative ease.

Gassy the Goblin
"Are goblins considered 'nonaggressive fauna' ?" shakes fist, "we will not be taken down with relative ease!" :D And, cool :) ! Luv that artwork too!
0
Reply